Today is my last day at Ceros. I’ve been at Ceros since November of 2014. Minus a 10 month sabbatical in 2016, I’ve worked at Ceros for nearly a full 7 years of my life. That’s almost 10% of an average American lifespan.

Ceros is a great company with a great product team. I got to solve some really fun (and some less fun) problems, worked with incredible people, had some wild adventures, and learned a ton. I got to build a DevOps department from the ground up to now three teams totalling 13 people and growing. I got to help a startup grow from 37 people, when I joined, to now approaching 400. It’s been a hell of a ride.

Now I’m on to the next adventure, which I couldn’t be more excited about.

For the last 3 years, I’ve been dreaming about a web platform that I think has the potential to drastically improve scientific and academic publishing for everyone.

If you’re not in, or adjacent to, academia you may not realize just how broken academic publishing is.

Academic publishing has been privatized and monopolized. Five major publishing houses own the majority (close to 80%) of the academic journals. They charge absolutely enormous fees to sell the output of academia back to the universities.

While this has wildly negative impacts in a lot of areas, the worst of it is in science.

Most scientific research is funded by the public in one way or another. The way scientists share the results of their research is by publishing papers in academic journals. The quality control process is performed by other scientists for free - meaning their (often public) university salaries are funding that work. The private journals then take the results of this work and sell it back to the universities for billions of dollars.

The vast majority of the public can’t even begin to afford to access the scientific and academic literature. The public who, in a democracy, ultimately decide which government policies get implemented and which ones do not.

Science is supposed to be an open process, and that’s why we should trust it. But with the results of scientific research being privatized and hidden behind paywalls, that stopped being true for the vast majority of people in the world. And this is a major contributor to the growing crisis of disbelief in scientific fact. A crisis that contributed to our struggle to manage the pandemic world wide.

The Open Access movement has tried any number of approaches to fixing the access side of it. But they’re mostly still sticking to the same journal model that was developed in the 1680s, when the papers were being bundled into booklets and sent through the mail. This means they have really high overhead, and most open access journals have had to fund themselves by charging a fee to publish. This creates a whole new host of problems, and has lead to the rise of pay to play journals with little or no refereeing.

What this means, practically, is that the peer review process has broken down. A dishonest researcher who gets rejected from a reputable journal can take their paper to a disreputable one and simply pay to have it published. There are over 10,000 journals. It’s impossible for the general public to track which ones are reputable and which ones are not. So as far as the public is concerned, once it’s published, it’s published.

For three years, I’ve been dreaming of a web platform that I believe could fix all of this. For the past three months, I’ve been building it on nights and weekends. 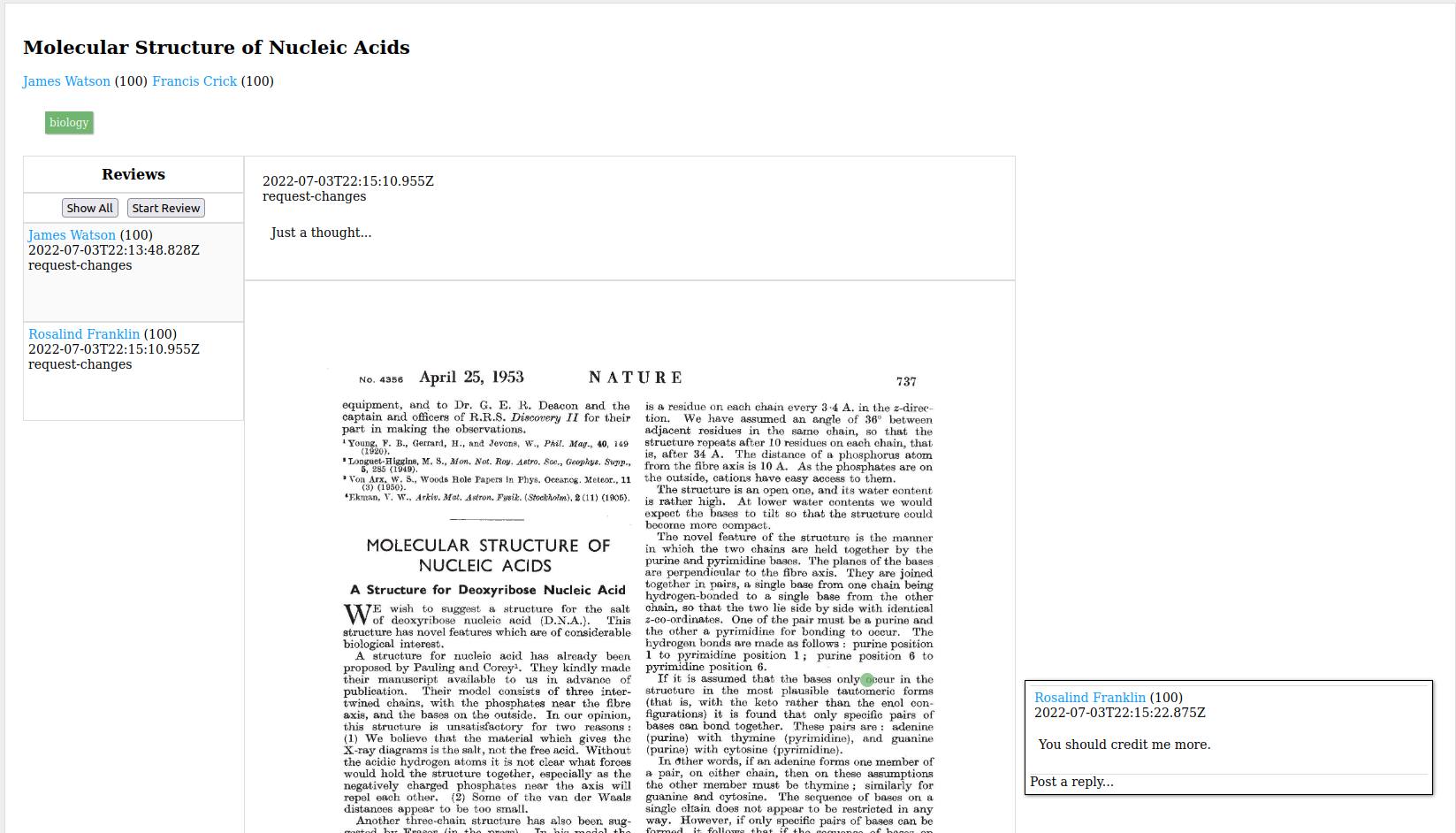 It would allow academics to self-organize the publishing process, without needing the journals or the publishing houses. It uses a reputation system to determine who can peer review and referee papers. It splits pre-publish editorial peer review from post publish refereeing to make sure the quality signal is preserved for the public. And it puts full control of the publishing process back in the hands of academic authors, while allowing their peers to offer helpful pre-publish feedback and to exercise post publish, public quality control.

This web platform would cut the overhead of scientific publishing by several orders of magnitude. I believe it could easily be funded by donations from the academics who use it, and eventually by the institutions (the universities) paying a tiny fraction of what they are now paying. That would allow it to be diamond open access - free to publish, free to access. If successful, it could open up the scientific and academic literature completely.

My hope is to build a non-profit to develop, operate, and maintain the web platform and have it governed by the scholars who use the platform and the workers who build it.

I’m very close to an alpha prototype of the platform. I hope to have one running on cloud infrastructure in the next week or two.

I’m seeking academics and scholars to serve as alpha testers and give me early feedback on the prototype. Could this work the way I think it could? Will this solve the problems of access in academic publishing, while preserving what’s good about the journal system? What am I missing? What else needs to be included in an open, public beta? If you or anyone you know might be interested in helping, reach out to me here and I’ll let you or them know when the alpha is ready!